Parents of the Young Killed by Police Support Each Other, Keep on Showing Up 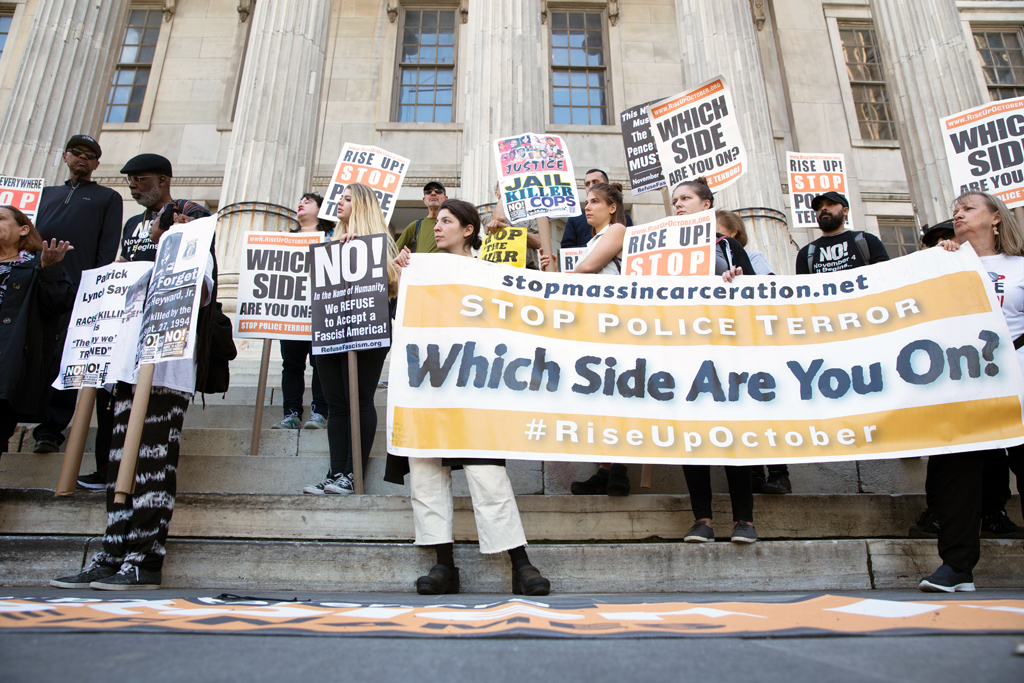 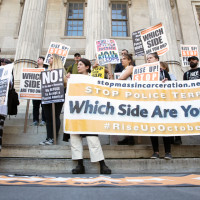 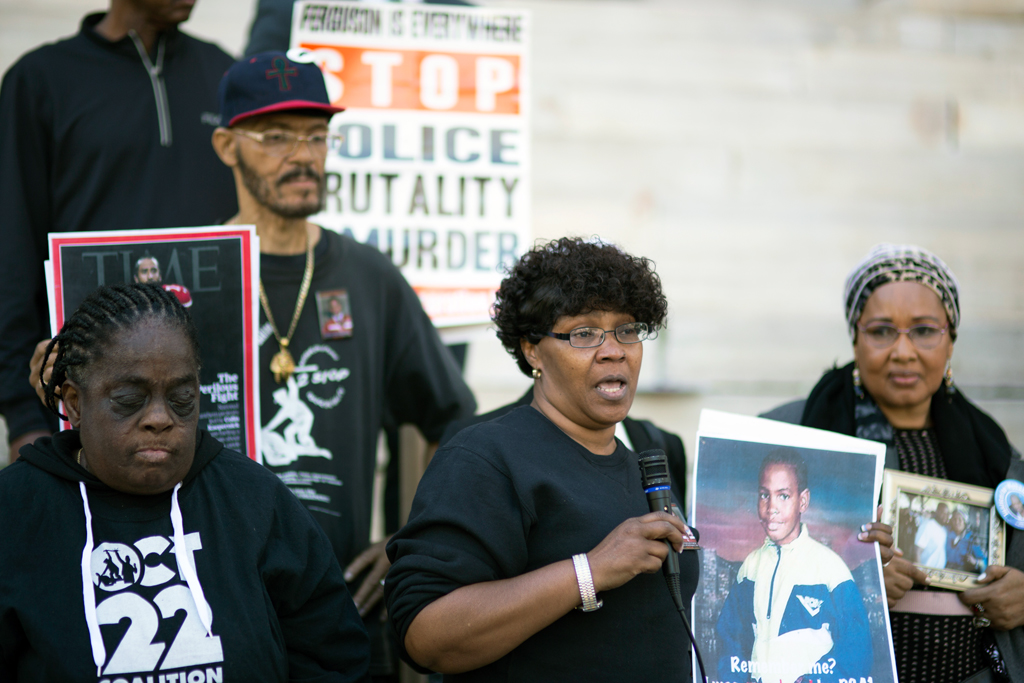 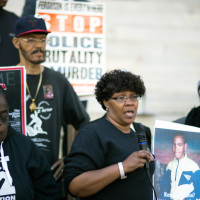 Parents of people killed by the police and parents with children currently incarcerated address the crowd outside Brooklyn, New York’s Borough Hall for the Oct. 22 National Day of Protest to Stop Police Brutality. 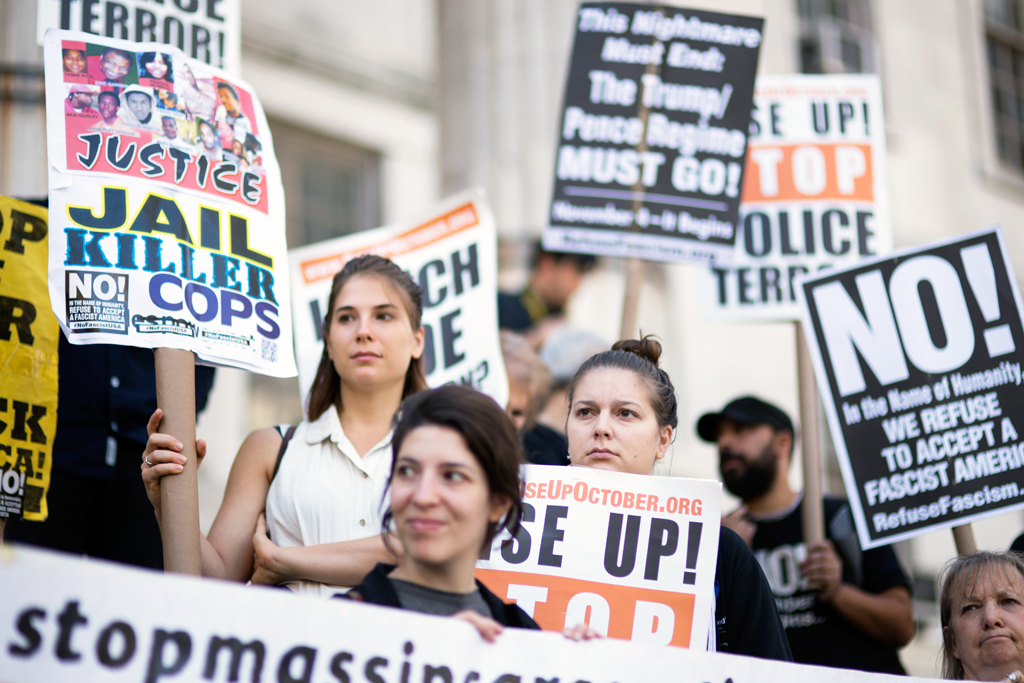 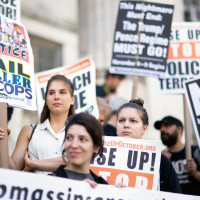 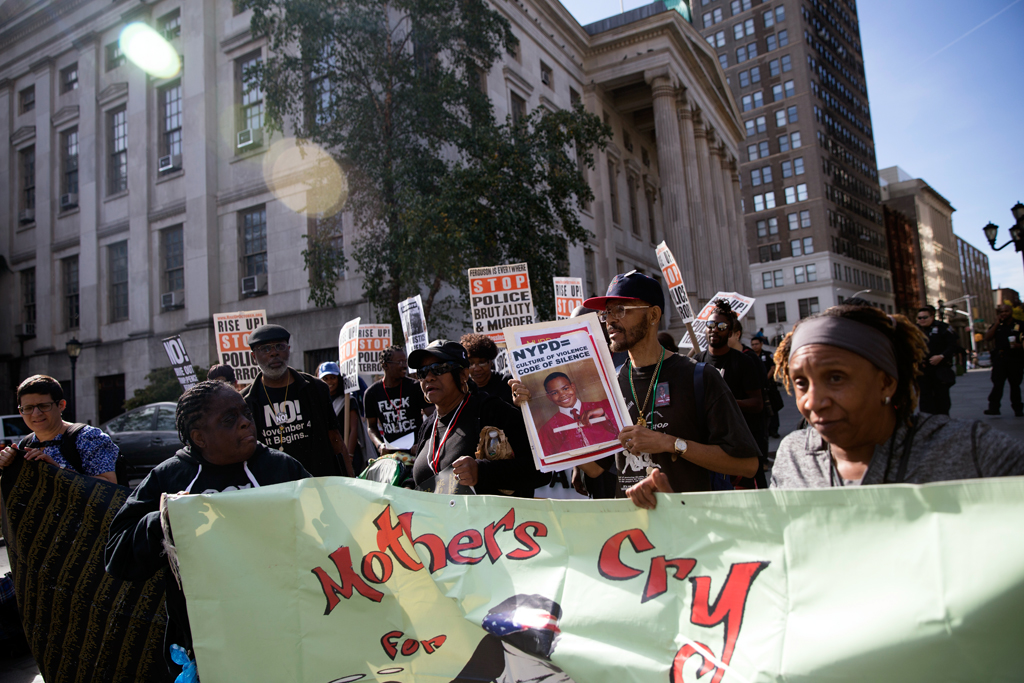 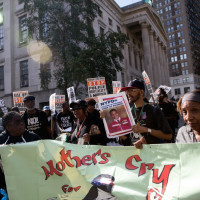 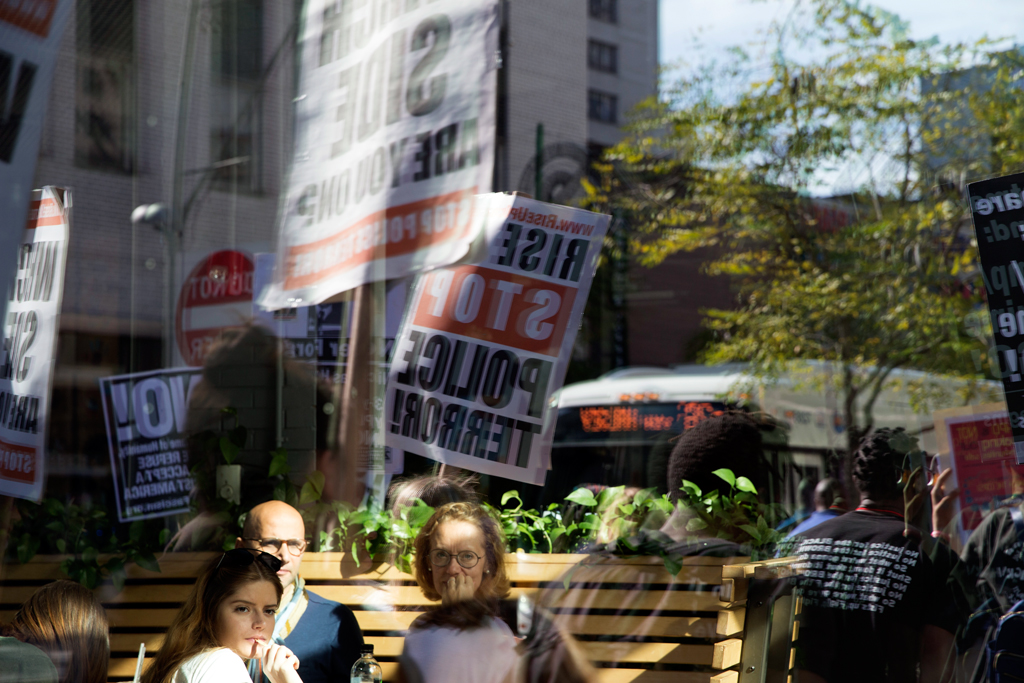 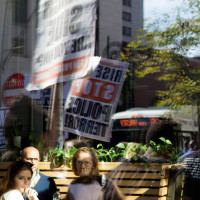 Diners in the downtown Brooklyn Shake Shack watched the protesters for the National Day of Protest to Stop Police Brutality march by. 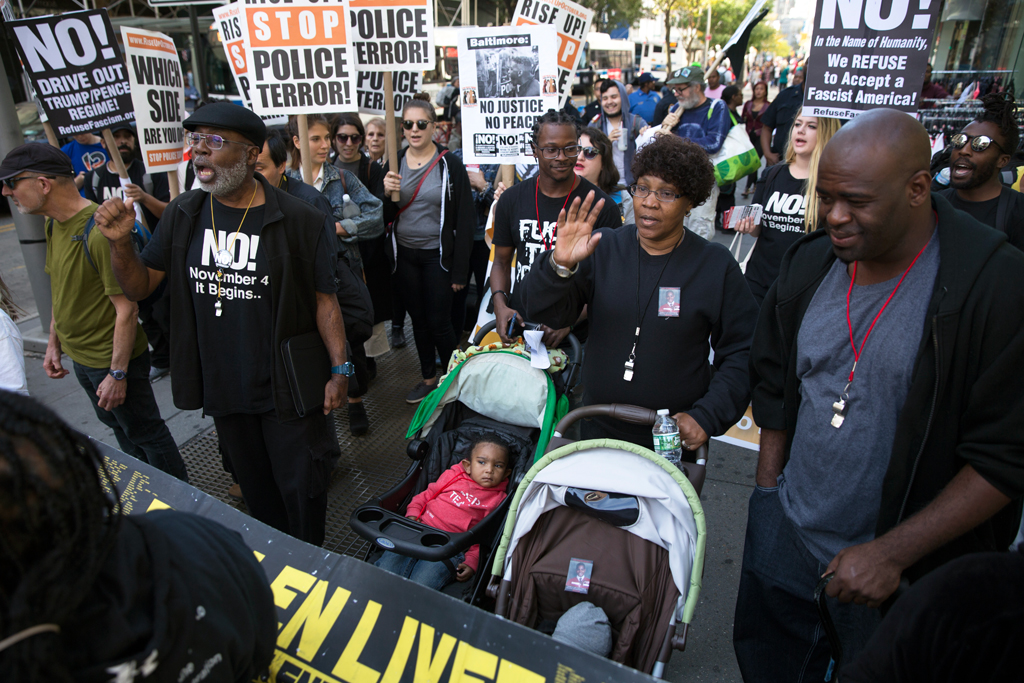 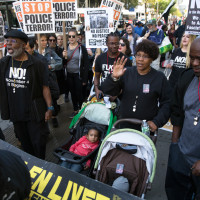 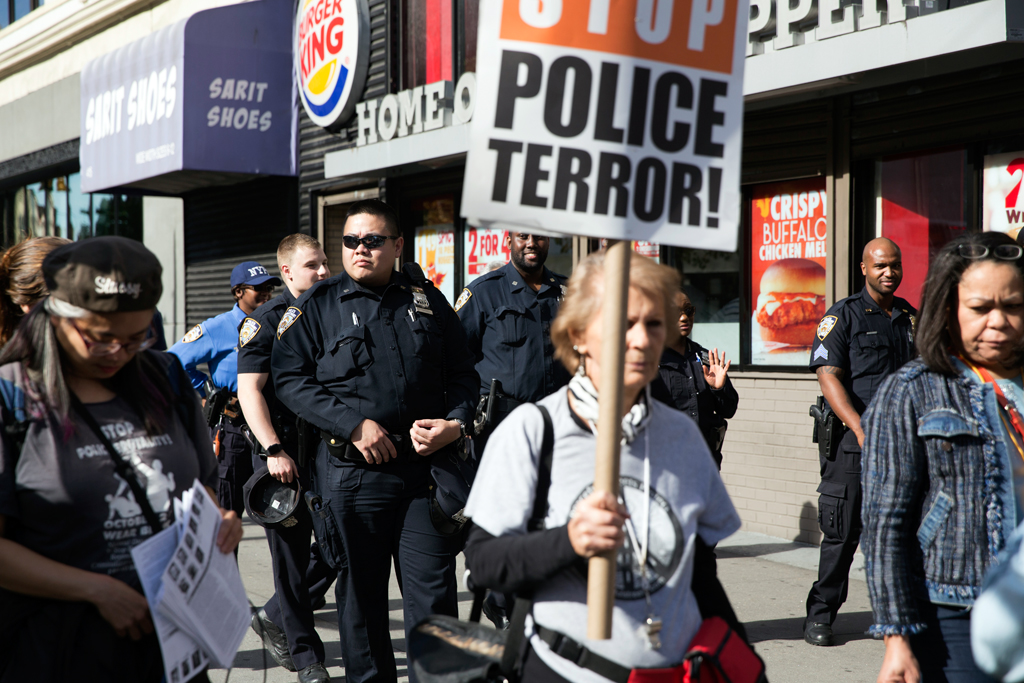 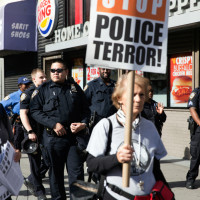 New York City Police Department officers accompanied the protesters as they marched through downtown Brooklyn. The ratio of officer to marcher was nearly one to one at times. 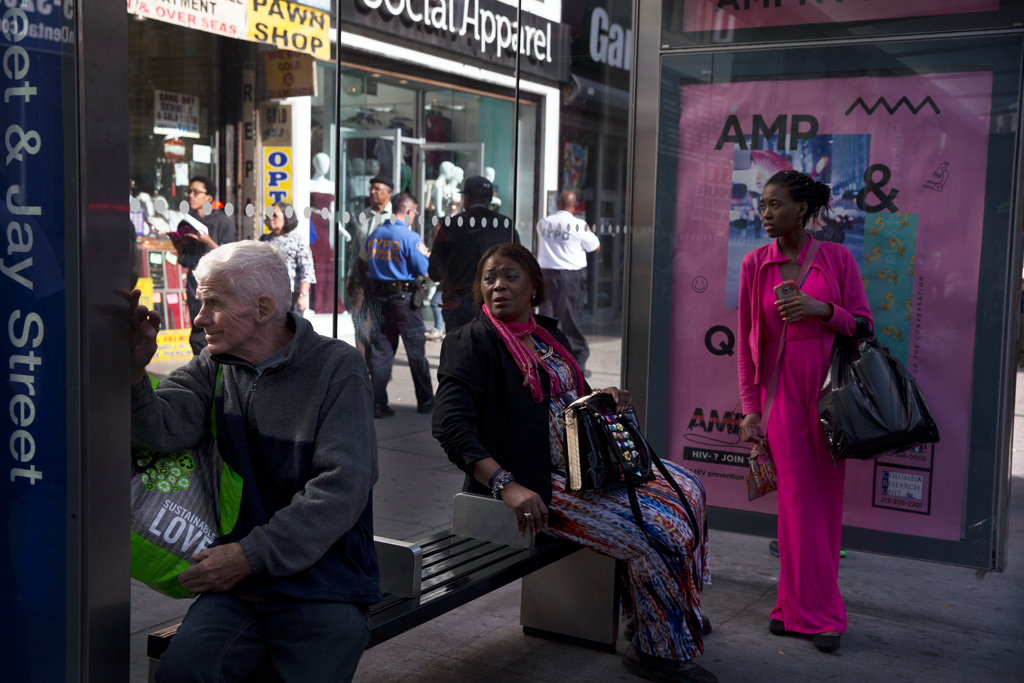 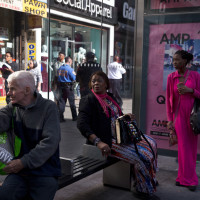 Pedestrians watch the Oct. 22 National Day of Protest to Stop Police Brutality activists as they march through downtown Brooklyn. 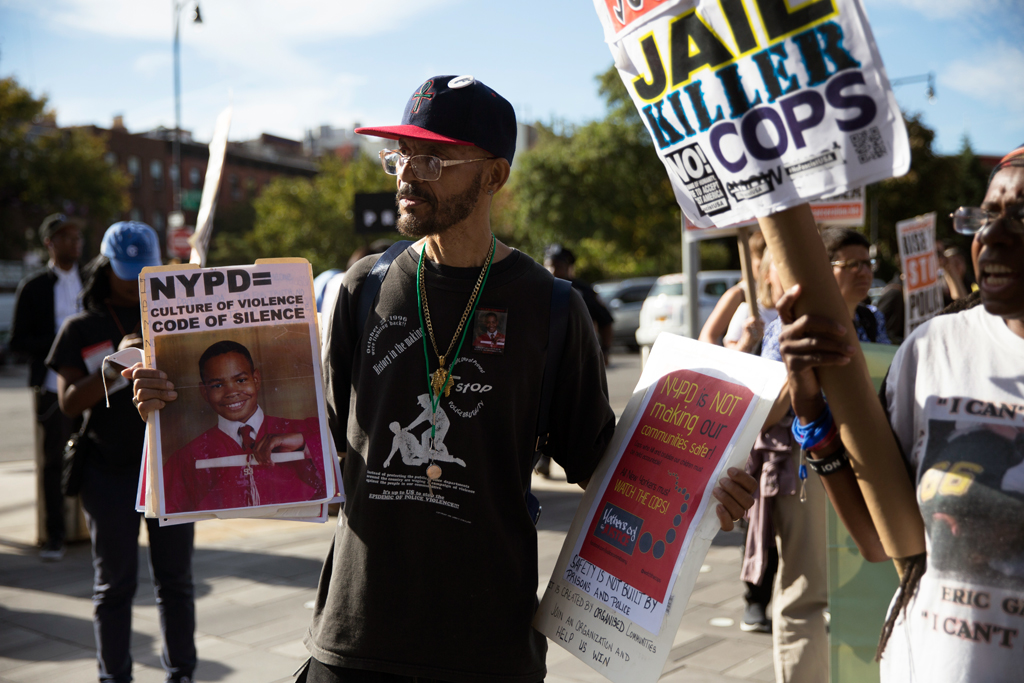 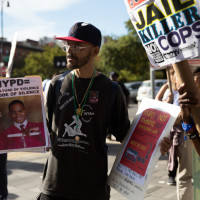 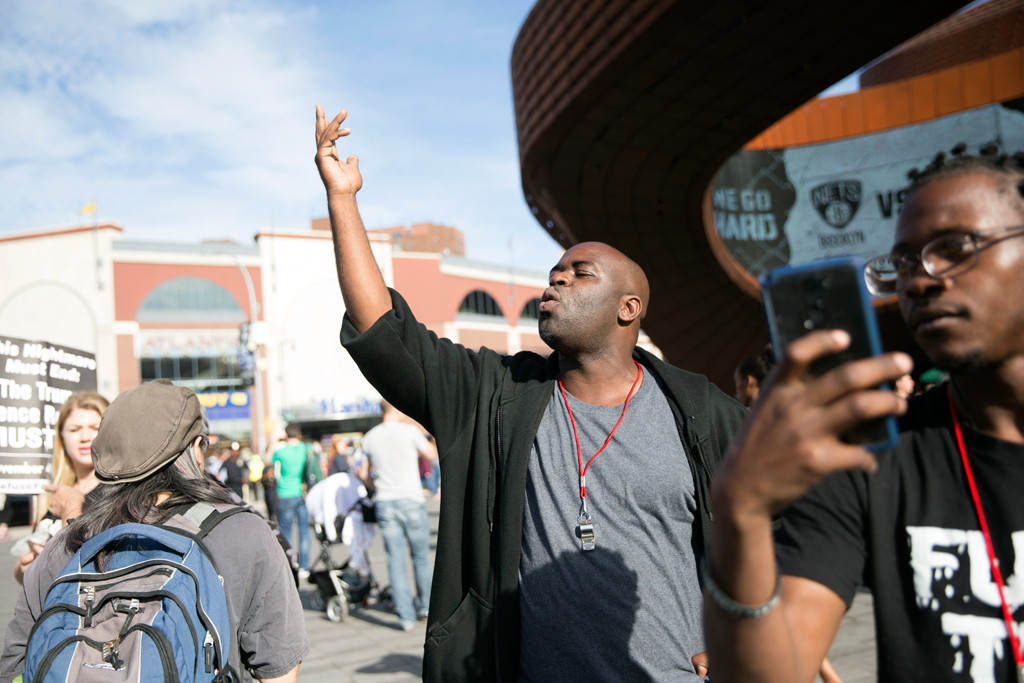 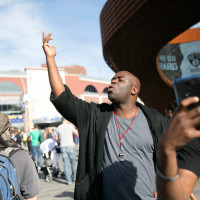 Community activist against police brutality and City Council candidate Anthony Beckford outside of Barclays Center on the October 22 National Day of Protest to Stop Police Brutality. 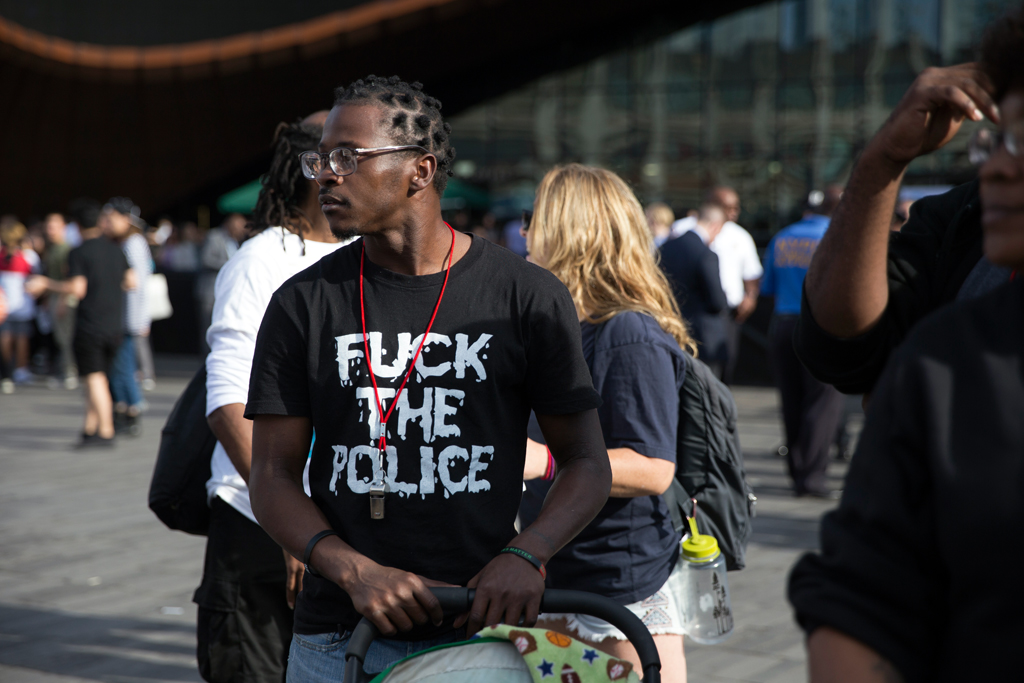 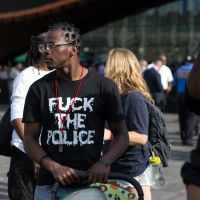 Prince Akeem, a participant in the October 22 National Day of Protest to Stop Police Brutality, wears a “Fuck the Police” shirt. 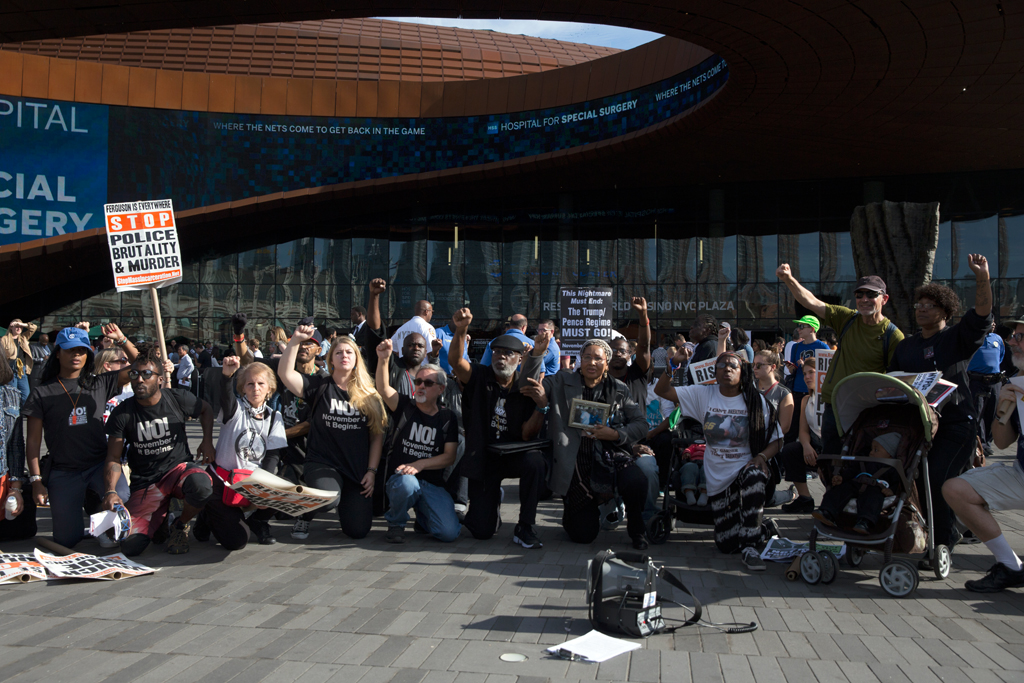 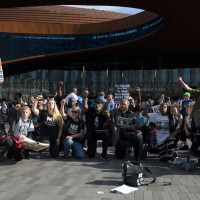 The activists took a knee in front of Barclays Center at the end of the October 22 National Day of Protest to Stop Police Brutality.

By Clarissa Sosin and Daryl Khan

NEW YORK — The parents who gathered on the steps of Brooklyn Borough Hall on a recent balmy Sunday morning came from different boroughs and ranged in age but all had one thing in common — all of them had buried a child who had been killed by the police.

One of them, Nicholas Heyward Sr., could not remember how many times he has spoken publicly about the night in 1994 his son was shot to death.

Nicholas Heyward Jr. was shot in the stairwell of his building in the Gowanus Houses public housing project while playing a children’s game of cops and robbers. Brian George, a New York Police Department housing officer responding to a 911 call of a man with a gun, shot the boy in the abdomen. The youth was holding a novelty toy rifle with an orange plug in the plastic barrell. George was never charged in connection with Heyward’s fatal shooting.

Since that day, Heyward Sr. has committed himself to getting some measure of justice for his son. He has become an activist, dedicating most of the last 23 years to fighting for reforms in both the police department and the law to avoid another parent having to bury his or her child.

Heyward Sr. was in the middle of one of the speeches he delivers at these events when he paused. He looked down, appearing crestfallen, and went off script. He looked disgusted.

He paused again, gathering himself.

“My son was murdered,” he shouted. “Innocent lives … unarmed innocent lives — stop saying kill! Never an investigation. No cop ever held accountable,” he said, his voice trailing off.

On Monday, Wayne Isaacs went on trial. He is an NYPD officer charged in the fatal shooting of Delrawn Small during a traffic dispute on July 4, 2016. On Thursday a civil case is slated to begin in the case of Mohamed Bah. Two days later, a confrontation between pro- and anti-Trump forces is anticipated in Times Square.

Some at Sunday’s rally laid the blame for increased police aggression on Donald Trump’s administration and Jeff Sessions’s Department of Justice. But state Assemblyman Charles Barron, a Democrat and former City Council member for Brooklyn, warned the crowd not to focus too much on Trump and his supporters. This is a fight that has been going on before the last presidential election, he said.

Hawa Bah’s son, Mohamed, was shot to death by the NYPD’s elite Emergency Service Unit on September 2012. She had flown into New York City to visit him. When she got to his home he was despondent. She called 911, and her son was fatally shot eight times, once in the head. A federal civil trial is slated to begin next week.

“It’s a club no one wants to join — but that they forced us to join,” she said. “My son was murdered in his own home. He never committed a crime in his whole life.”

An activist who goes by the name Sister Shirley from Staten Island was there to speak on behalf of Gwen Carr, whose son Eric Garner was seen saying “I can’t breathe” while he was being choked by officers.

“We call it a modern-day lynching,” she said.

The speakers stood on the steps of Borough Hall. A table in front of them had a stack of black-and-white fliers that fluttered in the breeze. They featured pictures and names of some of the New Yorkers killed by the NYPD since Amadou Diallo was shot by undercover officers while reaching for his wallet in the Bronx in 1999. Seven of them were in their teens, another seven were in their early 20s.

After the rally about two dozen protesters made their way through the heart of downtown Brooklyn’s commercial district on Fulton Street en route to Barclays Center, the sports and entertainment arena about a mile away. About the same number of police officers from the 84th Precinct escorted them.

The marchers held up a banner that read: “Which Side Are You On?” And they shouted chants including: “Send the killer cops to jail, the whole damn system is guilty as hell!”

Some people showed support as they made their way through the busy thoroughfare.

One woman, an employee at a Metro PCS store, punched her fist into the air and shouted “Corrupt! Corrupt!” at the officers escorting the march from behind.

Others showed their disgust. One man trotted alongside the protesters shouting, “Where’s the violence? Show me the violence? You people make me sick!”

In the plaza of Barclays Center, where the Brooklyn Nets were scheduled to play a basketball game against the Atlanta Hawks that afternoon, the protesters took a knee in honor of the ongoing controversy involving Colin Kaepernick.

Parents who had taken their children to watch the game paused to gawk.

The police escorts watched at the edge of the plaza, smirking. Earlier they had been making jokes as the parents of the dead children led chants. They changed the words of the chants to crass, sophomoric language.

One officer said to his colleague: “Blue lives matter.”

“No, bro, you haven’t heard, we’re supposed to say all lives matter,” the colleague responded, chuckling.

Another officer made an angry hiss, shook his head in disgust and chimed in: “I can’t believe our tax money is being wasted on this.”

After the march ended, Heyward Sr., his wife Donna and their baby son, pushed in a stroller during the protest, headed to the Gowanus Houses with a handful of other protesters. They sat in the courtyard enjoying the unseasonably warm fall afternoon.

They talked about what it would take to get some changes made to avoid Nicholas Heyward Jr.’s fate. They didn’t have an answer.

As afternoon turned to evening, Heyward Sr. walked into the playground named after his dead son, Nicholas Heyward Jr., while his infant son cooed in his stroller. He did not look up at the Parks Department sign with his older son’s name emblazoned on it.

He sat in the playground playing a game of peekaboo with his infant son Adonis. But his mind was still on Nicholas Jr.

Heyward Sr. sat to have his pictures taken by a news photographer for more than an hour. Adonis did not cry once. He played, occasionally squealing. Donna Heyward, Nicholas’s wife and Adonis’s mother, peeked into the stroller where her son sat grinning.

Constance Malcolm, the mother of Ramarley Graham, could not be at the protest because she had to go to a relative’s funeral, but two days later she said she was there in spirit. Other mothers and fathers she has met since becoming involved in police reform activism have become close friends and confidants. Sometimes, she said, they don’t even talk about their slain children when they chat on the phone.

A pile of pins and and a foam ball sat on the the kitchen counter. Malcolm said she looks on Pinterest to find craft projects. “I’ve taken it up,” she said sliding the needles into the red ball. “It keeps my mind off of things.” She was making Christmas ornaments, punching the pins into the ball in a pattern.

Later in the night she went through old videos on her computer.

“Look at this,” she said, as she scrolled past dozens and dozens of videos featuring her son. “Look how many of these there are. It’s incredible.”

She stopped, playing grainy video of her son casually walking into their former home moments before he was shot. Then there was video of the officer, Richard Haste, in the backyard.

“Do you know what bothers me?” Malcolm asked. “Whenever people talk about it, what happened to Ramarley. Or they find out I am his mom. They always say: Oh, that’s the boy who ran that the cops shot. They always say he was running. And he wasn’t. He wasn’t running.”

As she saw her guests out Tuesday evening, Malcolm paused at the front door. It struck her that the false story about her son running from the officers reminded her of Emmett Till, the 14-year-old kidnapped, tortured and killed in the Mississippi Delta in 1955 by J.W. Milam and Roy Bryant. He was killed because a woman, Carolyn Bryant, the wife of Roy, accused Till of wolf whistling at her outside Bryant’s Grocery, where she worked.

Carolyn Bryant admitted, a book published this year reported, that she had lied about Till whistling at her.

“Look at that. They said for all those years that that poor boy whistled at that woman,” Malcolm said. “And it took all these years for people to realize it was a lie. That it never happened.”

She shook her head at the thought. She hoped it wouldn’t take that long for the people to realize the truth about her son.